Companies in Kansas: The Industry Guide 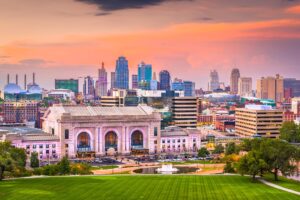 Hold on, hold on, don’t get yourself worked up, it is not totally weird to look up companies in Kansas. If you have plans to visit or relocate to the state, you need to prepare yourself, right?

Now, here’s what you should do: Streamline your search a little bit by breaking it down into industries.

Companies in Kansas by Industries

Indeed, the production of feed and forage in Kansas is a significant part of the state’s agricultural economy. Hay, silage, and feed grains produced within the state’s borders are sold mostly to livestock producers. In addition to wheat and sorghum production, the state is a national leader in cattle, sunflowers, bison, pigs, and soybean production.

Therefore, agriculture continues to be a major contributor to the state’s economy, bringing in millions of dollars and creating more employment. Agriculture is Kansas’ largest industry, accounting for nearly 40% of the state’s total GDP, and according to the most recent statistics, the state has 58,300 farms producing and raising top crops and livestock. Furthermore, cattle and calves, wheat, sorghum, soybeans and corn are among the state’s primary commodities.

To illustrate, companies in the Agriculture industry include:

Equipment and machinery for carrying people and products are manufactured in the Transportation Equipment Manufacturing subsector. This subsector is a key player in the state’s manufacturing industry as it contributes significantly to the national economy. For instance, motor vehicles, aeronautical items, railroad rolling stock, and shipbuilding are all part of this subsector.

Currently, there are two parts of the transportation equipment manufacturing industry that have a substantial role in Kansas’ economy. Indeed, manufacturing of aerospace products and parts is a major driver of the state’s economy, generating many high-paying employment. However, since 2009, the number of aerospace jobs in the state has been declining. In addition, the state has a modest number of auto body and trailer manufacturing companies. Yet, these are typically lower-paying jobs with a steady level of employment.

For example some top companies in Kansas manufacturing industry include:

Kansas is a top ten oil-producing state, accounting for over 1% of total crude oil production in the United States. Kansas is also a state that refines oil. Crude oil is delivered to the state’s three refineries via a network of pipelines, which can process around 390,000 barrels of crude oil per day. Diesel fuel, motor gasoline, and jet fuel are also among the petroleum products produced at the refineries.

Kansas became regarded as a significant oil-producing state after the discovery of the El Dorado field near Wichita in 1915. When then-State Geologist Erasmus Haworth mapped rock outcrops that could aid locate where oil might be held in the subsurface, it was one of the first areas where geology was applied in the quest for oil.

Top oil and gas exploration companies in Kansas include but are not limited to:

There’s also no shortage of unusual shopping opportunities in Kansas City. Moreover, craft items and luxury boutiques to antique hunting and one-of-a-kind souvenirs are never out of business.

However, here’s what you need to know about retail companies in Kansas City:

In the Kansas City area, there are a number of public and private schools with excellent graduation rates, student-to-faculty ratios, and also academic programs. Seven public or private universities in the area are among the Top 25 of Great Value Colleges’ 50 Most Affordable Colleges.

On the whole, companies in Kansas construction industry are:

Indeed, the hospitality industry encompasses a wide range of enterprises that offer services to customers. Specifically, it is centred on client happiness and offering unique experiences for them. Because it relies so heavily on discretionary spending and free time, the hospitality business is unusual.

Thus, hospitality based companies in Kansas include:

Thus, with an average weekly income of $1,392, the finance and insurance industry had one of the highest average wages in Kansas in 2017.

Therefore, companies in this industry include:

To conclude, start your journey by applying to high paying companies in Kansas HERE